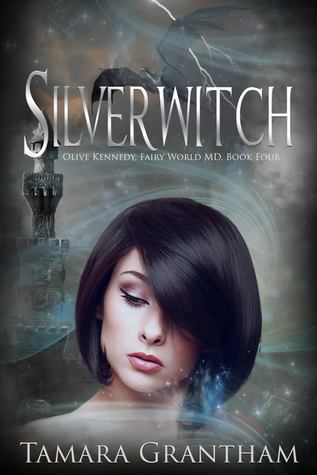 I am pleased to be a part of this book blitz organised by Xpresso Book Tours. Silverwitch is a romantic fantasy which is released today. Check out the excerpt below to get a taste of what the book is about and also enter the international giveaway for a chance to win a mystery book box of prizes! This is definitely going on my TBR pile, as always buy links are at the end of the post so do check them out if this tickles your fancy! If you want to read earlier books in the series you can grab those here.

Description:
It’s Faythander’s legend of King Arthur. And it’s not for the faint of heart.

Olive Kennedy, Fairy World MD, isn’t ready to go back to work. But when her dragon stepfather shows up on her doorstep with bad news of the world-ending variety, that’s exactly what she’ll have to do. He wants her to stop the elven queen from obtaining seven weapons of King Arthur fame, and he wants her to break into a dragon’s vault to do it.

One problem. Silvestra, the silverwitch of Dragon Spine Mountain, guards the weapons. And she’s not willing to give them up. With the help of Kull, her newly reunited, half-crazed Viking boyfriend, she’s hopeful they’ll stand up against the dragon. Plus, she’ll have the help from Kull’s warrior princess sister and a professional thief.
But Olive has never had great luck. What starts as a routine quest quickly turns into a life or death fight. And one of her companions won’t make it out alive…

Excerpt:
Through the flames, I saw Kull’s silhouette standing atop the lifeless form of the dragon. I almost didn’t recognize the man, shirtless, covered in blood, his hands clenching the mace as it swung back and forth, making the chain clink. Embers drifted past him on waves of hot, shimmering air. He looked like something from a legend—something primal—a force of destruction. Was this really the same man I’d spent my time with, who’d discussed building libraries, who spent his time reading books and making friendly chitchat with elven nobles? No, this wasn’t the Kull I knew.

My breathing grew shallow as I stared at the man atop the beast. Was this really the person I intended to spend the rest of my life with?

With the wind whipping his hair and the sandstorm as a backdrop, he looked like a true barbarian—and sometimes I had to remember, he was.

Stepping off the ledge, Kull approached me, walking guardedly, and then stopped. We only stood a few feet apart, but to me, it felt like miles.

He forced a smile.

My insides squirmed. This was him, wasn’t it? It felt as if the shadow, that constant companion that had haunted him since his father’s death, that had only recently been lifted, was returning once again.

I went to him and hugged him gently, resting my head on his chest. His heart beat in steady, slow thumps. It was still him, and I refused to lose him again.

About Tamara Grantham:
Tamara Grantham is the award-winning author of more than half a dozen books and novellas, including the Olive Kennedy: Fairy World MD series and the Shine novellas. Dreamthief, the first book of her Fairy World MD series, won first place for fantasy in INDIEFAB’S Book of the Year Awards, a RONE award for best New Adult Romance of 2016, and is a #1 bestseller on Amazon in both the Mythology and Fairy Tales categories with over 100 reviews.

Tamara holds a Bachelor’s degree in English. She has been a featured speaker at the Rose State Writing Conference and has been a panelist at Comic Con Wizard World speaking on the topic of female leads. For her first published project, she collaborated with New York-Times bestselling author, William Bernhardt, in writing the Shine series.

Born and raised in Texas, Tamara now lives with her husband and five children in Wichita, Kansas. She rarely has any free time, but when the stars align and she gets a moment to relax, she enjoys reading fantasy novels, taking nature walks, which fuel her inspiration for creating fantastical worlds, and watching every Star Wars or Star Trek movie ever made. You can find her online at www.TamaraGranthamBooks.com.

Giveaway:
Head to Rafflecopter to enter the International Giveaway for the opportunity to win a Clean Teen Publishing Mystery Box (Intl winner would get eBook prizes).