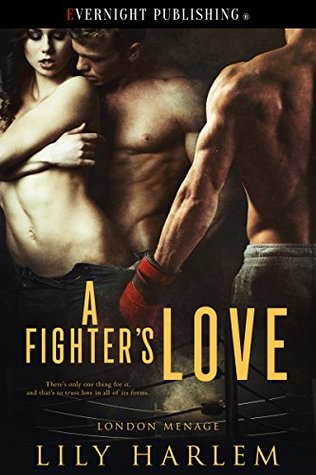 After battling her demons, Jenny has finally found the courage to stand up for herself and fight for the life she’s always dreamed of.

What she doesn’t expect is to find that as she emerges from her chrysalis, she’s very much caught the attention of two super-sexy, incredibly talented boxers at the club she helps out at. They’re enchanted by her, they’ll do anything for her, and heaven help anyone who tries to hurt her, including her miserly ex, Billy.

But as things heat up, it’s clear Dale and Jackson are no ordinary sparring partners. Beneath their tough exterior and lively banter, they share a softer relationship that’s kept well hidden from the rest of the world. Will Jenny be allowed into that gentle place? Can they make it work when passion and lust hits them all hard? There’s only one thing for it, and that’s to trust love in all of its forms.

A Fighter’s Love is book #3 in the London Menage series. All books are fine as standalone reading as the characters are only loosely linked.

I have been meaning to read Lily Harlem for some time, I have several of her books on my TBR all of which I intend to read sooner rather than later, especially now that I’ve read this.

A Fighter’s Love introduces us to Jenny, she’s in a relationship with boxing club owner Billy who is to put it frankly an arsehole. Having been together since they were kids and been through some tough times together Jenny feels obliged to be with him even though she is being mistreated and is extremely unhappy.

Then two of the boxers, Dale and Jackson offer her an out with the moral support and courage she needs to walk away from this relationship as well as an offer of a new relationship, with them.

Dale and Jackson were wonderful characters, already in a committed relationship with each other their pursuit of Jenny is something they both want to add a third person, a woman to their bi-relationship. They are very open with her and protective of her and each other.

Jenny wasn’t my favourite character ever, she’s very naive and I found it hard to believe that somebody that naive would so easily transition into a menage relationship. Not saying they wouldn’t do it I just think there would be more hesitation and questions. I don’t think she would have just let her libido lead the charge.

That said, I loved the three of them as a unit, the way they fit so comfortably together, the sex scenes felt real and natural, the way they spoke to each other and came together as one unit just felt completely real. I really enjoyed this and will definitely be trying to find more time to catch up on my other Lily Harlem books!

I want to thank Lily Harlem for the eARC of this book so that I could read and review honestly.

One thought on “#Review: A Fighters Love by Lily Harlem @lily_harlem @evernightpub”